084: Scaling Up Excellence: Getting To More Without Settling For Less | with Bob Sutton 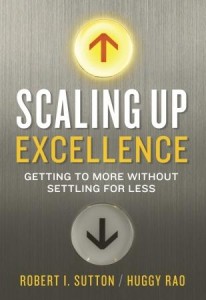 If you’ve created a great little coffeeshop, how do you expand and put your coffeeshops in cities around the world without watering down what makes your coffeeshop great? That’s a question that Starbucks certainly struggled to answer.

Or, if you have a key practice or mindset — for example, lean manufacturing — how do you spread it throughout your organization?

It’s a question of scaling up … taking a pocket of excellence and expanding it. But it’s really hard. There are countless example of organizations who try to scale up but end up just spreading mediocrity — or worse, their efforts to expand actually ruin the organization.

Bob Sutton and Huggy Rao, researchers and professors from Stanford University, spent seven years studying this question. And now they’re sharing their findings in their new book Scaling Up Excellence: Getting To More Without Settling For Less.

Jesse and Bob discuss several take-aways from Scaling Up Excellence: