126: Holacracy – An Agile Management System for a Rapidly Changing World | with Brian Robertson 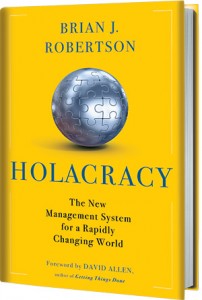 Holacracy is a fundamentally different “operating system” for organizations. Holacracy revolutionizes how a company is structured, how decisions are made, and how authority is distributed. Perhaps the best-known examples of companies who have adopted Holacracy are Zappos and David Allen Company. “No one reports to anyone anymore,” explains The Washington Post about Zappos. “Instead, employees self-manage and belong to different decision-making circles that keep the company operating.”

On Engaging Leader, we’ve often discussed how 21st-century teams require going beyond traditional command-and-control leadership (which I call Influence 2.0) to a more interactive mode that I call “engagership” or Influence 3.0. One crucial principle of Influence 3.0 is delegating authority for planning and decisions. There are many reasons this is critical; for one, today’s business environment is so complex and changes so rapidly that organizations lose if  they rely on a “heroic leader” or even a group of senior leaders acquiring information, attempting to predict the future, and cascading decisions to the rest of the organization.

For most leaders, this is an ongoing challenge, because authority seems to keep ending up back in our lap; perhaps it’s the micromanaging inclination of the leader to take charge, or a team member’s fearful or lazy inclination to pass the buck — or is it actually the result of traditional top-down organizational structure of authority? But if we simply eliminate hierarchy altogether, we find that “flat-management” alternatives … well, they fall flat. For example, a lack of clarity encourages people to avoid making decisions, or else to seek only decisions that have a full consensus, slowing everything down until there is a crisis that prompts the big boss to momentarily return to command-and-control leadership.

Holacracy proposes to be a third way: it promises to bring structure and discipline while distributing authority and accountability where it’s most effective. If that’s the case, then Holacracy could be a tremendous opportunity for us to practice Influence 3.0 in our organizations.

According to HolacracyOne, the key components of Holacracy are:

Here are some phrases that have been used to describe Holacracy:

As described on Wikipedia, the advantages of Holacracy include:

Brian Robertson is author of Holacracy: The New Management System for a Rapidly Changing World. Brian created Holacracy and founded HolacracyOne, the organization that is training people and companies all over the world in this new system. Robertson had previously launched a successful software company, where he first introduced the principles that would become Holacracy, making him not just a management theorist, but someone who has successfully implemented a holacracy-powered organization. He lives in Philadelphia.