143: Lessons from Starbucks on Leading with Values First | with Howard Behar 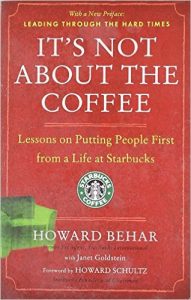 As the president of Starbucks North America and Starbucks International, Howard Behar spent over 20 years helping grow the company into a worldwide phenomenon. During those years, he was integral in establishing and nurturing the Starbucks culture.

Since the beginning, the Starbucks approach put people and values first. And at various turning points in its history, Starbucks fought to hang on its culture, core values, and passion — all while growing exponentially.

In this interview, Jesse and Howard discuss stories and lessons about:

In this episode, Jesse interviews Howard about his book It’s Not About the Coffee, as well as his newest book The Magic Cup.

Howard Behar is a speaker, mentor, and author of It’s Not About the Coffee as well as his newest book The Magic Cup. He served at Starbucks for over 20 years in roles that included VP of Operations, president of Starbucks North America, founding president of Starbucks International, and a board member. He joined Starbucks in 1989, when it had only 28 stores located around Seattle, and helped lead its growth to over 15,000 stores spanning five continents. Along with CEO Howard Schultz and COO/CFO Orin Smith, Howard Behar made up the leadership team known as “H2O” that made Starbucks one of the most admired companies in the world.

Thank you to Freshbooks for sponsoring this episode of Engaging Leader. Freshbooks is offering our listeners a free month of unrestricted use of their online accounting software (no credit card needed). Claim your free month at Freshbooks.com/Leader and enter “Engaging Leader” in the section that asks how you heard about Freshbooks.