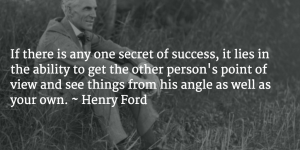 As you probably already know, yawns are contagious. Right now, the image below is causing many of you to feel the need to yawn. This even works with animals. A study by the University of London observed that 21 of 29 dogs yawned when a stranger yawned in front of them.

Why? The answer is in what science refers to as “mirror neurons” or “empathy neurons.” As a result of mirror neurons, we literally mirror each other in corresponding regions of our brain. If a scientist hooked the two of us up to a magnetic resonance imaging (MRI) machine, when I yawn, the same regions of the brain would light up in both of us. 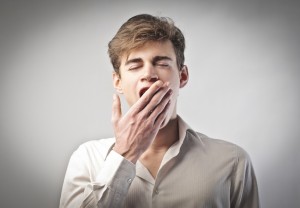 For leaders, this is huge. Understanding this is one of the keys that separate a traditional leader from a 21st century engager.

If we’re simply owning our position and trying to persuade other people to our point of view, they are more likely to own their position and put up a wall and defend their point of view. Or they might say, “It’s pointless arguing with this person, let me just give in.” But they wouldn’t actually support or buy into that perspective.

For most of us, that’s the secret reason why people resist our influence. We don’t realize what’s happening, because we can’t see if their brain is lighting up and matching the same patterns as our own brain. We only see the result, which is that they don’t take the action we’re hoping for.

This problem happens even if all the facts and logic are on our side. Neurology professor Richard Restak said, “We are not thinking machines. We are feeling machines who think.”

So how can we influence feeling machines to take action? It starts by triggering their mirror neurons to nudge their thoughts and feelings in the right direction. There are two powerful tools to do that, and you need both.

Empathetic perspective means seeing this interaction through the eyes of your audience.

It was true 100 years ago when Henry Ford said this, and it’s even more true in the 21st century: “If there is any one secret of success, it lies in the ability to get the other person’s point of view and see things from his angle as well as your own.”

Just last week, I was asked to review a draft of the initial announcement of a program launch for employees. The draft had been written from the perspective of the company department that created the program, describing the department’s aspirations. I recommended that it be re-written from the employee’s perspective, answering their primary question, “What’s in it for me?” This wasn’t rocket science; every corporate communications person knows the importance of addressing the WIIFM question. But as leaders, we’re often so focused on our objective that we forget that without the empathetic perspective, we’ll leave people cold even with a hot program.

Before you walk into your next meeting, take a moment to imagine what those people are thinking and feeling about the topic of the meeting. Before you click “send” on that department email, re-read it while you pretend you are one of the employees who will receive it. As you plan a major initiative, create branding that will catch the interest of the right people and appeal to what they care about.

While empathetic perspective should be your starting point, empathetic thinking is what you should do while in the act of communicating. In that moment, actively try to understand their thoughts and feelings and – most importantly – allow yourself to be influenced by their point of view. You are much more likely to trigger their mirror neurons and get a similar response from them.

In other words, the audience will be more empathetic to your perspective. They’ll be more likely to be influenced by the way you’re thinking.

To accomplish this, tell yourself that you want to mutually arrive at a destination. Treat your target outcome as a compass pointing you in the right direction. But don’t get obsessively fixed on it. Be open to the idea that the other person might help you identify a better final destination. If you genuinely are open-minded like that, his or her empathy neurons will make him more likely to be open-minded with you. As in all of life, the journey ends up being more important than the destination.

With every communication you do, whether something formal or just a casual interaction, you will be more effective if you use these two tools of powerful empathy. Like a yawn, they get the mirror neurons firing, but in a way that will help you influence people to take action.

Other resources about powerful empathy: