Pull Yourself Back from the Brink of Your Caffeine-Driven, Smartphone-Addicted Life 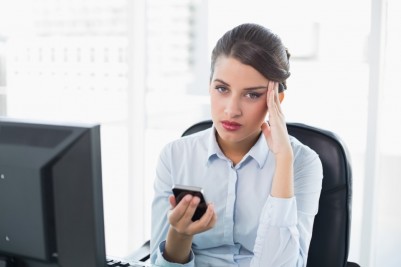 This is a guest post by Scott Eblin, author of the new book Overworked and Overwhelmed: The Mindfulness Alternative. Scott shared a draft of the book with me; I loved it, eagerly read it from cover to cover, and enthusiastically recommend it to you.

On a summer Sunday night four years ago, I found myself standing in front of a roomful of about 80 corporate managers who probably didn’t want to be there. They had just finished the first week of a high-profile leadership development program in one of the world’s largest companies and week two was scheduled to start at 7:30 am the next morning. They were polite but understandably restless. I was there as a guest speaker brought in to share some of what I’d learned from working with several hundred other leaders in their company.

Since high-achieving people usually like to compare themselves to their peers, I asked if they’d like to see the summary results of hundreds of leadership behavior self-assessments completed by those other leaders. Of course they said “yes.” Starting with the highest assessed behaviors, everyone could quickly identify with commitment to behaviors like making timely decisions, being clear about priorities, and accepting accountability for results. Then we took a look at the lowest assessed behaviors like pacing myself, taking regular time to step back, and giving others my full presence and attention. There were nods and murmurs of recognition. I summed it up for the group with the headline, “Leaders in your company are so busy doing stuff that they probably don’t see what needs to be done.”

Then the room erupted. Not in anger, but in vociferous agreement. “Yeah, that’s exactly it!” one person exclaimed. “Yeah,” another agreed, “they expect us to be corporate warriors, answer e-mails at 2:00 in the morning and get by on four hours of sleep a night.” Several people at once said, “We can’t keep this up.”

The conversation I led that evening was the beginning of work and a thought process that led to my new book, Overworked and Overwhelmed: The Mindfulness Alternative. One of the things I’ve noticed in my work as an executive coach and speaker over the past four or five years is that most of the executives, managers, and professionals I work with are trying to work harder every year. The demands of a “do more with less” culture and a 24/7, smartphone-enabled operating environment have left too many people teetering on the brink of a caffeine-addicted, sleep-deprived, stressed-out existence. The impact of all of that on short-term productivity and happiness, and long-term health and well-being, is devastating.

Because of all they’re trying to do and pay attention to, many of the leaders and professionals I work with are in a chronic state of fight-or-flight. Their stress hormones and blood pressure are too high, and their immune and digestive systems don’t operate at healthy levels. In the short run, all of that leads to anxiety, insomnia, poor decision-making, lack of focus, and generally poor health. In the long run, it leads to broken relationships, premature aging, and early death.

It doesn’t have to be that way. There are simple, relatively easy steps you can take to pull your life from the brink. That’s where the “mindfulness alternative” comes in. Over the past few years, mindfulness has gotten more and more attention in the mainstream media – it’s even made the cover of Time magazine. The picture that a lot of people get in their minds when they hear the word “mindfulness” is blissed-out people sitting cross-legged while they meditate and chant. That’s one way to do it, but it’s not something that most stressed-out professionals are going to do.

What I’m presenting in my book is what I’ve learned about how the basics of mindfulness can be used and applied by just about anyone who needs to get out of chronic fight-or-flight. Fight-or-flight is supposed to be the “emergency response system” controlled by your body’s sympathetic nervous system. It’s a big problem when the fight-or-flight response gets stuck in the “on” position and becomes chronic.

That’s where another system that all of us have – but few of us have heard of – comes into play. It’s called your rest-and-digest response and is controlled by your body’s parasympathetic nervous system. Think of it as fight-or-flight being the gas pedal, and rest-and-digest as the brakes. Fortunately, there are simple, easy-to-do routines that we can learn from the practice of mindfulness that can help even the most overworked and overwhelmed people activate their rest-and-digest response. I summarize a lot of those routines in my book and offer a simple one-page framework called the Life GPS® that helps make it easy to follow through on the routines that help you show up at your best.

It’s never too late to pull yourself back from the brink and reclaim your life. Now is a great time to get started. Overworked and Overwhelmed can help you do that. 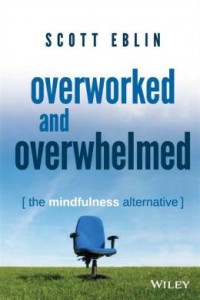 Scott Eblin is the author of two books: his first was The Next Level: What Insiders Know About Executive Success, and his new book is Overworked and Overwhelmed: The Mindfulness Alternative. Scott is on the faculty at Georgetown University, he’s a former Fortune 500 executive, and he’s the co-founder and president of The Eblin Group, a professional development and executive coaching firm. Listen to Jesse’s interview with Scott, “Overworked and Overwhelmed: 4 tools for leaders to reclaim their lives and boost productivity,” once the interview airs on October 15.