I’m a born leader. A natural engager? Not so much.

According to the DISC personality profiles, I’m primarily a D for Dominant, which is another way of saying “Bossy.” 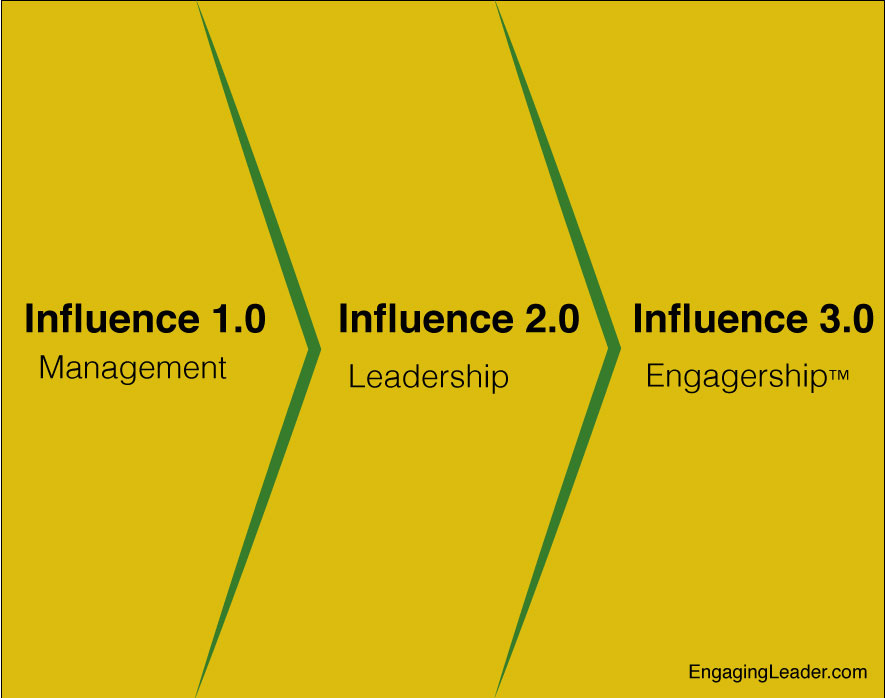 I’m a classic firstborn. I babysat my brother and sister in junior high, won a seat on Youth Council and earned valedictorian in high school, and went to college on a full scholarship. After college, I led project teams, then a team of direct reports, and then became a firm partner by age 30.

But I had a lot to learn about true influence.

We now live in a world where “born leaders” no longer have the impact they once did. We must learn to upgrade to a new level of influence.

When I started my career in the early 1990s, a strong leader was in high demand. The past couple decades had seen a transition from what could be called the “Influence 1.0” model of the Industrial Revolution.

From the early 1900s through the post-WWII years, management was key to success in the industrial era. The assembly line of Henry Ford and the scientific management principles of Frederick Taylor, Frank and Lillian Gilbreth, and W. Edwards Deming proved that management skills created efficiency and impacted the bottom line. Influence 1.0 was the domain of supervisors and middle management.

In the 1970s and 80s, as the economy shifted to the Information Age, attention shifted to the leverage of a key leader especially the role of CEO. Lee Iacocca led Chrysler’s turnaround and became a TV personality with commercials that challenged, “If you can find a better car, buy it.” Jack Welch was trimming 25% of GE’s workforce and increasing the company’s value 4000%. Warren Bennis published On Becoming a Leader.

But by then, the world of influence was again changing.

In the early 90s, the Iron Curtain fell. More people started using the Internet, and then the Web. The world was becoming smaller, more diverse, and more connected. Market conditions changed more quickly, and became more complex and harder to predict. Also, information was no longer the domain of the corporate brass; everyone in the company could find out what they needed to know.

For decades, Influence 2.0 had been producing superior business results. But then its results fell to simply average, quietly surpassed by a new mode of influence.

Researchers started to notice. In 1995, Daniel Goleman published Emotional Intelligence, making the case that “soft” skills like empathy had greater impact than IQ, decisiveness, and other traditional leadership skills. In 1997, David Burnham published “Power is Still the Great Motivator – With a Difference!” with research pointing out that superior results were no longer produced by the charismatic, decisive style of leadership (even when dressed up in new democratic clothing). And in 2001, Jim Collins published Good to Great, bringing visibility to the superior influence of what he called the “Level 5” leader, a humbler CEO in contrast to the typical “genius with a thousand helpers.”

Influence 3.0 is not about you and your vision; it’s about the team. It’s about the team making things happen — things that you and the team care deeply about. You are a leader, but you aren’t the center. You aren’t driving the team and making decisions; you cultivate a team that makes decisions. You stimulate healthy dialogue, help the team discover its purpose and vision, and help the team stay focused on its purpose and the results that matter.

I don’t know where we should take this company, but I do know that if I start with the right people, ask them the right questions, and engage them in vigorous debate, we will find a way to make this company great.
~ Jim Collins, paraphrasing the attitude of Level 5 leaders in Good to Great

What do you think are the new skills of engagership? Let us know in the comments section!