Connect the Dots for Your Team 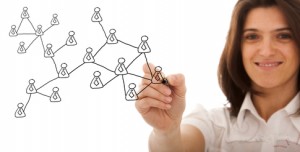 As leaders, many of us are “wired” to be forward-looking and ready for progress and change. (We like to think we’re visionary, but I suppose that’s for others to decide.)

Remember the book Who Moved My Cheese? Published in 1998, this business fable by Spencer Johnson spent nearly five years on the New York Times business bestseller list. The central theme was summarized by Haw’s “Handwriting on the Wall”:

A few years after Who Moved My Cheese? was published, a leadership team on which I served held a strategic retreat. The team members were asked to complete an assessment (based on the book) that measured our capability for monitoring and adapting to change. My score showed very high “change capability” (no surprise for anyone who chooses to be a consultant, since the career involves constant change). The meeting facilitator said this was the most significant component of effective leadership. Though I felt proud of my score (hey, I’ll take ego boosts when they come), I also felt doubtful this “change capability” was truly the #1 factor for leaders. I wasn’t alone; several of us had wrinkled brows, and a couple team members voiced their skepticism.

Regardless of whether attitude toward change is truly a key ingredient for successful leadership, it is true that many leaders are highly change-capable. We feel very comfortable with shifting priorities. In fact, often what seems to others like a major priority seems to us like a minor shift or even just a subtle nuance.

Leaders can connect the dots very easily. Let’s say the message six months ago was Xy and the message today is Xz. That doesn’t feel to us like a change in strategy; it’s simply the next step in our “X” strategy. Not only are we comfortable with (and perhaps eager for) change, we also know all the dots between Xy and Xz … additional data elements that we’ve been involved with, such as customer feedback, committee meetings, and board meetings.

But to those we lead, the dots often don’t connect so clearly. One day the big message was Xy, and today it’s Xz, and they weren’t involved in all the dots in between. Xz feels completely different from Xy. As a result, people we lead can perceive us as unstable or arbitrarily pushing a “program of the day.”

Here are three keys to connecting the dots for your team:

Identifying your core message isn’t easy. Sticking with it can be even harder. But as Bill Clinton once proved with “It’s the Economy, Stupid,” it can focus your team into an unstoppable force.